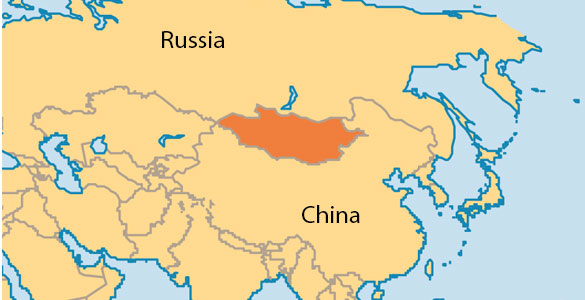 Mongolia is located in the central part of Asia, bordering with Russia and China. The total territory of the country is over 1.5 million square kilometers and the most sparsely populated country in the world. (approximately 1 square kilometer per 1.6 persons.) Mongolia is the eighteenth largest country in the world by size of territory. It is also the world's second-largest landlocked country. The average altitude is 1580m above sea level. The highest point is the Huiten peak (4374m) in the Altai mountain ranges in the west. The lowest point is the Hoh nuur or lake (532m) above sea level which is located in the east. From the west to the east, it’s around 2392 km long and 1259 km long from south to north. Mongolia is home to high mountains, wide steppe and Gobi desert. There are over 3800 permanently running rivers in the territory of Mongolia. Mongolian rivers are included in Arctic, Pacific and land-locked central Asian River basins. About 4000 lakes are in Mongolia. The biggest fresh water lake is Hovsgol and the biggest salt one is Uvs.

Additionally, Mongolia is land of a lot of species of fauna and flora including 146 species of mammal, almost 430 different types of birds, 8 kinds of amphibians and 76 species of fish. There are some rarest animals like Gobi bear, snow leopard, Takhi or wild horse etc. 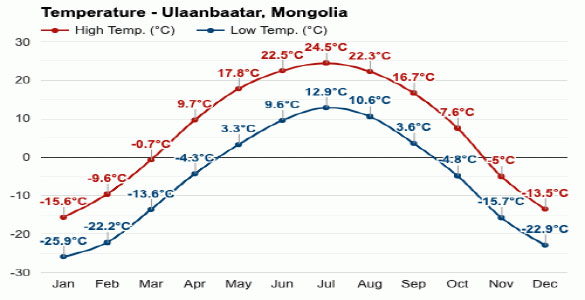 Mongolia, a landlocked country, is located far from the seas and oceans so it has a harsh continental climate with very little rainfall, long, cold winters and short summers. Generally, average temperatures are around 0.2°C (32°F), winter temperatures are -10° …-30°C (14° …22°F) and summer temperatures are 10° …27°C (50° …80°F). Several occasions, temperatures can falls to as low as -50 degree Celsius in January, the coldest month whereas summer’s temperatures can rise to 30 degree Celsius in July, the hottest month. The annual average precipitation is 200 to 220 mm. Mongolia is the land of winds and especially sharp winds blow in spring, April and May. Mongolia is called “The land of the blue sky” as there are about 250 sunny days a year. 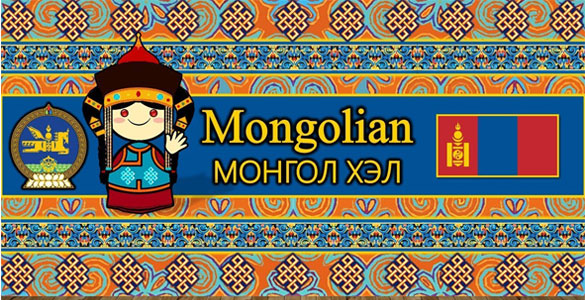 The official language is Mongolian which belongs to Altaic language family. It is spoken by 95% of the population. Rest of the people speak Kazakh, Tuvan and Buryat across the country.

Today, the Cyrillic alphabet has been written in Written language since 1946, even though in the past several scripts such as Mongolian traditional script, Tod script, Durvuljin or Square script and Soyombo scripts were used in written language. One of these scripts is Mongolian Traditional script or Hudum Mongol Bichig was created specifically for the Mongolian language. It is traditionally written in vertical lines, top-down and derived from the Old Uighur alphabet. 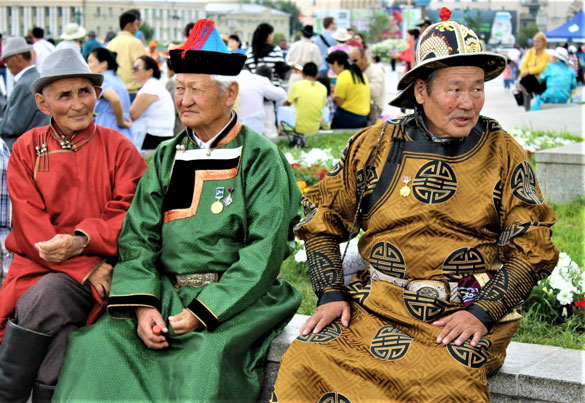 Mongolia has approximately over 3 million people. The majority of the population of Mongolia is Khalkha Mongols (85%), but minority groups include Kazakh, Dorvod, Bayad, Buriad, Dariganga, Zahchin, Urianhai, Oold, Torguud and more. In other words, there are more than 20 ethnic groups. The largest of these minority groups, Kazakhs make up around 5% percent of the total population.
The nation also has an extremely young population, with over 60 percent of people less than thirty years old while 40% under the age of 14. 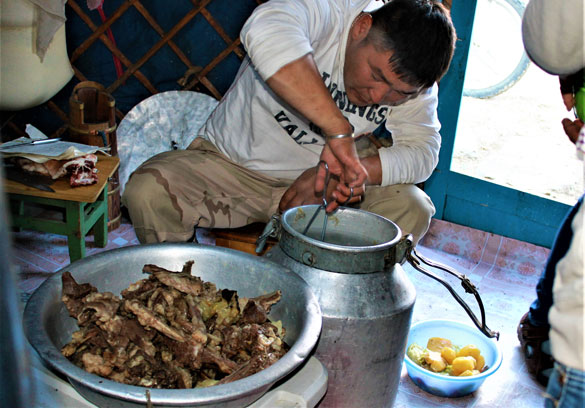 The Mongolian cuisine is divided into dairy products and meat food. The meat food comprises the meals made of pure and fresh meat alone. The uncut meat is being boiled together with other seasoning and flavoring with vegetables and served and the uncut meat is also used for making such national special dishes as horhog (pieces of meat cooked by means of putting them into a sealed vessel together with the red-hot stones inside), boodog (the whole of goat, marmot cooked with red-hot stones put inside). Also, two of the most popular dishes are Buuz (a meat filled steamed dumpling) and Khuushuur (deep-fried pastry.)
In summertime, Mongolians prefer to drink fermented milk (mare’s milk), cow and goat’s milk, yoghurt and eat dried curds, cream and cheese which contain different types of vitamins and minerals. 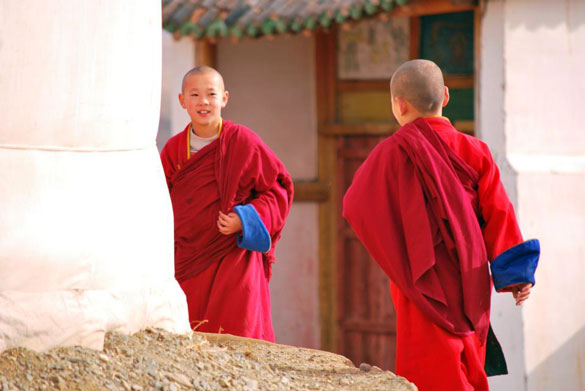 In Mongolia, there are different types of religions such as Buddhism (53%) since the 16th century, Shamanism (in the north), Muslims in the West (Kazakh groups). The main religion is Buddhism or Lamaism, which is the Yellow Sect of Tibetan Buddhism. Until 16th century, shamanism, worshipping the Blue Sky, was the dominant religion in Mongolia. Lamaism was introduced in 1586 by the leader Altan Khan (1507–83) then it gained more popularity.

At the beginning of the 20th century, Mongolia had hundreds of Buddhist monasteries and about 30 percent of all men were monks. Communists led an anti-religious campaign in the 1930s, more than 700 monasteries were destroyed and thousands of monks were killed. 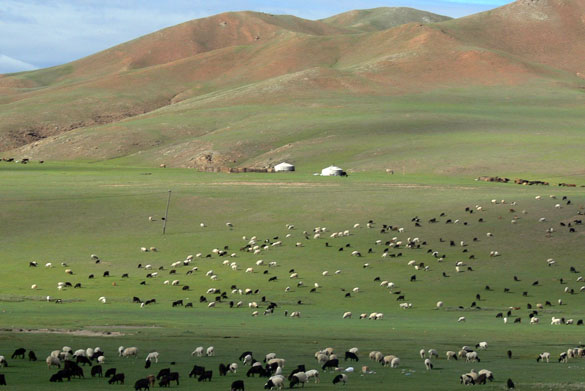 Economic activity traditionally in Mongolia has been based on the agriculture and breeding of livestock: sheep, goats, cattle (mainly yak), horses, and camels. From these livestock, numerous products including meat, dairy products, wool and cashmere are collected. The total of livestock is about 71 million in 2019.  Agricultural production takes place in some regions where grains (wheat, crop,) potatoes and other vegetables are grown.
The country is rich in natural resources or mineral deposits including coal, copper, gold, fluorspar, and molybdenum, tin, tungsten and gold account for a large part of industrial production and foreign investment. 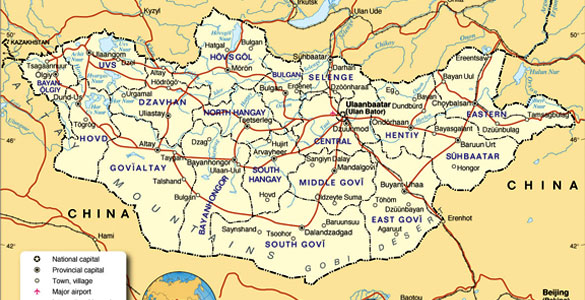 1206 – Chinggis Khan was proclaimed for ruler of the Mongol empire

1264 – Capital moved from Karakorum to Beijing

1279 - Yuan Dynasty was established by Khubilai in China.

1911 - The Qing dynasty falls and Outer Mongolia declares its independence.

1945 - Mongolians vote for independence in a UN referendum. Mongolia was recognized by the Republic of China.

1952 - Choibalsan dies, and was replaced as prime minister by Tsedenbal, the MPRP general secretary since 1940.

1990 – Street demonstrations force resignation of the MPRP Politburo. Political parties are legalised. Elections to the Great Hural (parliament) are won by the MPRP, but 19 of the 50 seats in a new standing legislature go to non-communists.

1992 - Mongolia's new constitution gives first place to human rights and freedom. In the first democratic elections the MPRP wins 71 of the 76 seats in the new single-chamber Great Khural.

1993 - The first direct presidential elections are won by Ochirbat, nominated by the National and Social Democrats.

2000 - After the democrats form three new governments in two years the MPRP wins 72 seats in the Great Hural elections. The National and Social Democrats and three other parties form a new Democratic Party.

2003 July - It is announced that 200 soldiers will be sent to Iraq to contribute to peacekeeping.

2011 July - Mongolia selects the US Peabody Energy, China's Shenhua and a Russian-Mongolian consortium as partners to develop the highly sought-after Tavan Tolgoi coal deposit in the Gobi desert.

2012 June - Parliamentary elections. Democratic Party wins most seats and goes on to form a coalition with the Mongolian People's Revolutionary Party.

2013 June - Tsakhiagiin Elbegdorj, from the Democratic Party, wins a second term as president.

Mongolia in the 13th century

The 13th century was the period of Mongolians’ history in the world. This is the history or era of Chinggis Khaan, his generals, warriors, and descendants who occupied the 13th century.

In the 10-12th centuries, various nomadic tribes of Mongolian origin used to live in the vast area of land stretching from great Gobi desert in the south to Lake Baikal in the north. In 1189, Temujin was proclaimed Khan of the Hamag Mongolians and was given title “Chinggis Khaan”. He subsequently conquered other clans and established Mongolian Empire in 1206. Chinggis khan united the Mongolian people under the sun and made them the strong nation then conquered half of the world. Chinggis Khaan was a remarkable great military leader, genius politician. Chinggis Khaan left to posterity a powerful and unconquerable Empire, as well as pride and grateful memories of himself. He passed away at the age of 66, in 1227.
After the death of Chinggis Khaan, his third son Ogodei became the second Khaan of the Mongolian Empire. Ogodei reigned from 1228 to 1241. The Mongolian Empire expanded to comprise northern China, Middle East, Russia, Ukraine and Iran. Hungary, Poland in 1242.

Grandson of Chinggis Khaan - Khubilai Khaan - conquered the whole territory of China and founded the Yuan Dynasty in China. The Mongol Empire reached its greatest territorial extent in the 13th century. At their peak, the Mongols controlled between 11 and 12 million contiguous square miles, encompassing most of Asia and extending westward to the Eastern Europe. Mongols also granted religious freedom, encouraged trade and created the first international postal system. The Mongol Empire existed for almost 150 years, up to the end of the 14th century.

Mongolia in the 17th-19th centuries

After the Mongolian Empire, Mongols lost their previous unity and were divided into Western Mongols or Oirats and Eastern Mongols. Furthermore, in the 16th century, Eastern Mongolia split up into Outer Mongolia and Inner Mongolia under the influence of Manchu. Manchu domination in Asia started from the end of the 15th century. The Manchu was a highly militaristic state, that attacked and subjugated Mongolia. The Mongols waged war on each other and lost their unity, powerful finally were completely conquered by Manchus in 1691. Mongolia came under the full control of Manchurians. Manchus colonization lasted for 220 years or up to the 20th century. The Ching Dynasty established its rule and laws over the entire territory of Mongolia

In 1911 the Mongols Monarchy was established. 8th Bogd Javzandamba khutagt was elected Mongolian Last Khaan who was Grand lama.
The struggle of D.Sukhbaatar and his fellow revolutionaries against the Manchu brought about complete political and territorial independence in 1921. As the result of the Mongolian People’s revolution in 1921, Mongolia was released from Manchu colonization.
The victory of People’s revolution enabled the country to embark on a new course of development, focusing on strengthening the state independence of Mongolia. During the period from 1921 to 1924, the new government carried out important changes in the political, economical, social and health spheres of the limited monarchy of Mongolia.
Undeclared war started on 28 May 1939, when Japanese troops attacked Mongolia's borders in the area of the Khakhyn-Gol. Mongolian-Soviet joint forces stopped the invader in August, 1939.
After the II World War, Mongolia adopted the Soviet five-year-plan pattern in the economic policy. In 1958, 99.7 percent of the country's total livestock was nationalized.
Mongolia remained one of the most closed countries in the world up until 1990s. Politically, the country was a satellite of the Soviet system. Economically, Mongolia was heavily dependent on Russian subsidies. Distortions in the economy and inefficient governance brought the country to social, economic and political stagnation.

In 1990’s, Mongolia transferred to Free Market economy and Democracy, and set the goal of building “democratic human socialism” based on a multi-party democracy. In January 1992, a new constitution was established.
The first President of Mongolia was elected by public election in 1993. The president is elected for a four year term. The Mongolian first president was P.Ochirbat. Mongolia elects the Parliament on national level. The State Great Khural, the parliament has 76 members, elected for a four year term in single-seat constituencies. Heavy and light industries, power plants, secondary schools, railways, telephone stations and telegraph lines have been built. Now, Mongolia has over 3 million people and 62 million livestock.