The Gobi Desert  is a large desert region in Asia. It covers parts of northern and northwestern China, and of southern Mongolia.
The Gobi is a cold desert, with frost and occasionally snow occurring on its dunes. Besides being quite far north, it is also located on a plateau roughly 910–1,520 metres (2,990–4,990 ft) above sea level, which contributes to its low temperatures. An average of approximately 194 millimetres (7.6 in) of rain falls annually in the Gobi. The climate of the Gobi is one of great extremes, combined with rapid changes of temperature of as much as 35 °C (63 °F). These can occur not only seasonally but within 24 hours.
There is some famous sightseeing in the Southern Mongolia (Gobi Desert) such as Khongor sand dunes, Bayanzag, Yol Valley and Tsagaan Suvarga

Khongoriin Els sand dunes stretch for an extraordinary 100km and are 21 kilometers wide and high. The dunes lie on the northern part of the mountains of Sevree and Zuulun Mountain. Local people call that by Singing Dune because of the sound produced by masses of sand moving in the wind can be heard from afar. That is why the dunes have been given the name ‘The Singing Sands’ or ‘Duut Manhan’. Near the Hongor Gol at the northern edge of the sand dunes is an oasis. 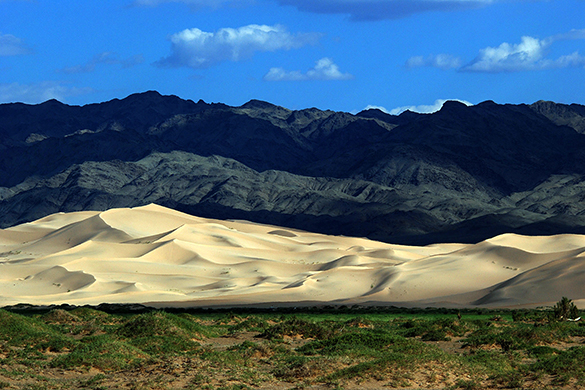 Bayanzag is located near by Bulgan Village, and archaeological finds of the Paleolithic Era, which are displayed in Natural History Museum in Ulaanbaatar, were found here. In the west the site is better known as the Flaming Cliffs, so named by explorer Roy Charman Andrews. In the same area he discovered petrified forests, remains of mammals and in particular the skeleton of a hornless rhinoceros, the largest known mammal in the world. Other finds in this location were complete dinosaur skeletons, eggs with a diameter of 10-15cm and hatch longs from the Cretaceous Period. And also there are saxual forest known as Gobi forest. 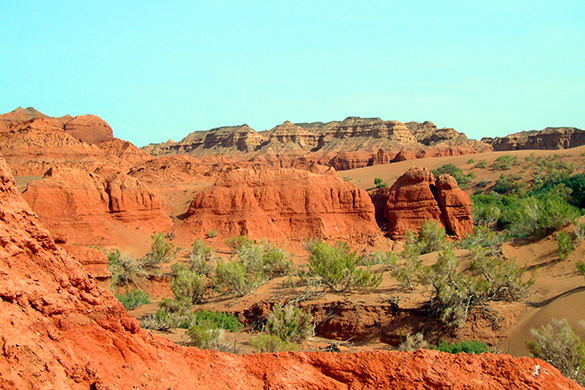 Yoliin Valley is the narrow canyon of a river that flows through Zuun Saikhan Mountain (2,816m above sea level). The gorge has sheer rock walls with a height of 200m in the central part of the gorge. It has been protected since 1965 and has an area of 70 square kilometers of strictly protected area. A spring is two or three kilometers long. The wind strongly flows through gorge and freezes into a thick corridor of ice that stretches along for a distance. During the rainy season, rain falls at the summit of the mountain and flows down into the sheer canyon, forming waterfalls. Only two people can pass through the narrowest part at the same time and you will see only a blue line of a sky. Ibex, mountain goat, red fox, vultures and other species of animals are local inhabitants of this place .A small museum marks the entrance to the protected zone and provides information on the petrified trees, fauna and flora of the Gobi.

The rocky formations of Tsagaan Suvarga,”white stupa”, are located in the Southeast of the sum Ölziit, on the Southern border of the province of Dundgovi. These rocky formations eroded by the wind look like a ruined city if you observe them from a certain distance (85 kilometres, 52,82 miles). They are about 60 metres (196,85 feet) high and 400 metres (1312,34 feet) long. 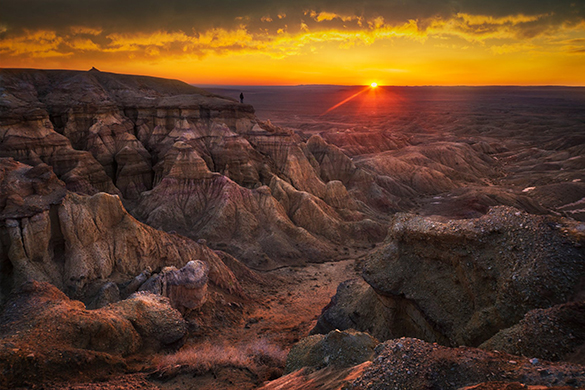