Summer in Mongolia is the warmest season, as sometimes temperatures can reach +40 centigrade (average the temperature is from +10’C-27’C), air is dry and pleasant to travel around.  Also the summer is when Mongolia gets the majority of its rainfall. Mongolian herders eagerly await these rains for the grass they bring their livestock, and the steppe turns from a dry, dead tan to its beautiful green. Summer is when many semi-nomadic families will head out from the aimag cities to the countryside in order to tend their herds, shear their wool, and create a bewildering array of dairy products.
Most tourists’ flock here in summer to enjoy the comfortable temperatures and see the vast landscapes of wide open country and nomadic culture.

The biggest festival of the Mongolia is the Naadam Festival celebrated in Mongolia nationwide on July 11-13. The festival is also locally termed "Eriin Gurvan Naadam" (эрийн гурван наадам) "the three games of men". The games are Mongolian wrestling, horse racing, and archery, and are held throughout the country during midsummer. Women have started participating in the archery and girls in the horse-racing games, but not in Mongolian wrestling. 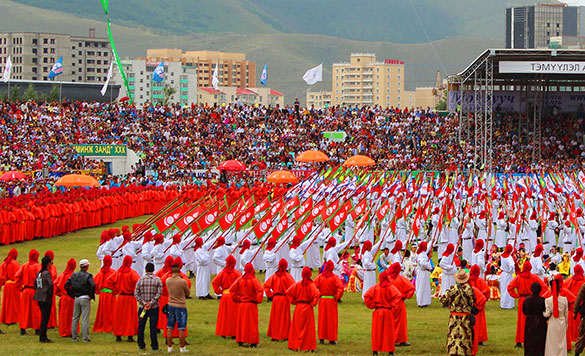 Mongolian wrestling has no weight divisions, so mostly the biggest wrestlers are often the best. The wrestlers are divided into 2 sides and it begins with zasuul honoring the glorious titled wrestlers to each other by their unique sounded speech and while wrestlers do short eagle dance by putting hand at the shoulder of the zasuul. Wrestler wears gutul heavy big boots, shuudag tight unflattering pants and zodog open-fronted and long sleeved small vest across the shoulders. Winners are bestowed glorious titles depending on how many rounds they win. There are nachin (falcon) – 5 rounds; khartsaga (hawk) – 6 rounds; zaan (elephant) – 7 rounds; garid (the Garuda) – 8 rounds and arslan (lion) – given to the winner of the tournament. When an arslan wins 2 years in a row he becomes an avarga, or titan. One renowned wrestler was given the most prestigious and lengthy title of the ‘Eye-Pleasing Nationally Famous Mighty and Invincible Giant’. All titles signify strength and are given during the national festival Naadam. There is a variety of wrestling methods and some elders say there are hundreds of them. Mongolians are really excellent at wrestling, riding and archery.

Mongolians loved horse racing for over 21 centuries. In modern times, horse racing is mainly held during Naadam Festival and Lunar New Year. Riders are kids from age five to 12. There are six categories of horse racing, depending on the age of the horses; shudlen a two-year-old horse will race for 15km while six-year-old azarga and ikh nas horses race for up to 30km. There is no special track but just open countryside. Before a race, the riders sing an ancient song –Gyngoo for the horses wishing for strength and speed and audience all decked out in traditional finery. Some riders prefer saddle and some not. The winner is declared tumnii ekh, or ‘leader of 10 thousand’ and the five winning horses are admired and the riders drink some special airag and sprinkles on the horse’s back. After the races, praise-singer extols the best riders and their horses and 5 winning horses and their owners would be talked about in reverence by the crowd. 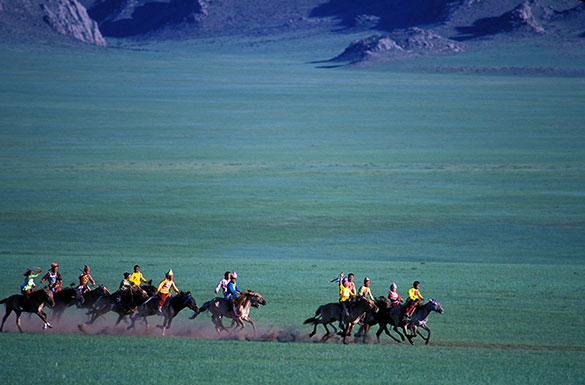 Five lines engraved on an ancient Mongolian target immortalizing the phenomenal record of Yesuhei- baatar, saying that his arrow hit the target at a distance of 536 meters. The bow is an ancient invention dating back to the Mesolithic Period. Ancient Mongolians contributed to design of the bow as a combat weapon. Today, Mongolians use less complicated form of archery than in the ancient times; targeting at cork cylinders braided together with leather straps. It is four meters in line and 50cm high. The target is placed on the ground at a distance of 75 meters for men and 60 meters for women. In the past, Mongolians used three types of bows; “big hand” (165-170cm), ”average hand” (160cm), “small hand' (150cm). Today Mongolians mostly use the average hand bow, which requires a force of 22 to 38kg to draw.
Arrows are made of pine wood and feather fins allowing it to reach distance of 900 meters. Naadam archery also attracts individual archers as well as team of 8-12 persons. Male archer shoots forty arrows at each target. Traditionally dressed judges stand by the targets raising their hands in the air to indicate the quality of the shot with uukhai sound but surprisingly never get injured. They praise the best shot in a traditional drawing recitative voice. 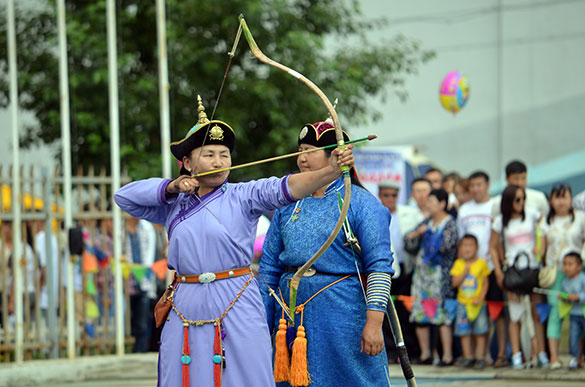 Similar to the National Naadam Festival, The Danshig Naadam festival occurs in Ulaanbaatar, and while it will still hold archery, horse racing and wrestling competitions, it differs from the earlier Naadam festival with its focus on the history and practice of Bud-dhism in Mongolia. Drawing on the traditional yearly gatherings of the seven Mongol princes of the Khalka province, the Danshig Naadam represents a symbolic demonstration of unity as well as a religious and political event for the Khalka Mongols. After the People’s Revolution of 1921, the religious elements of this festival were removed and the name was changed from Danshig Naadam to simply ‘Naadam’. The revival of the Danshig Naadam for the first time in 93 years by the administration of Ulaanbaatar city and the Gandantegchinlen Monastery of Mongolia under the auspices of the “Historic, Harmonious and Hospitable” initiative has reintroduced the religious importance of the event by including several performances and events highlighting Buddhism’s influence on the people and culture of Mongolia. Last year’s event was held from August 8th to 9th, commemorating the 380th anniversary of Mongolia’s first Buddhist leader, Holy Zanabazar. Zanabazar was made religious leader in 1639, at the age of five, and an enormous Danshig was held in celebration. In addition to the horse racing, archery and wrestling competitions, Danshig Naadam celebrates ancient Buddhist traditions such as Tsam Dancing. Tsam came to Mongolia in the early 18th century, and was first performed in the country in 1786. A distinct form of meditation, Tsam dancing is a subtly complex ritual performance which requires significant study and training. Visitors will be transfixed by combination of music, dancing and the intricate and stunning masks, known as tsam masks, worn by the dancers. In addition to the tsam dancing spectators can enjoy a variety of spectacles and activities not offered at the Naadam festival. These include a variety of Buddhist rituals, several competitions among monks and theoretical debates. 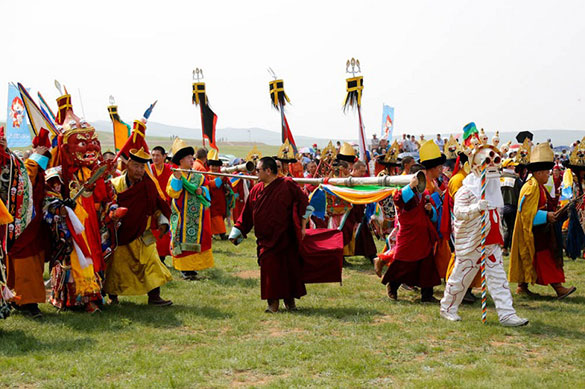 In Mongolia, the yak plays an important part in supporting local livelihoods. Yaks are used to transport people and cargo, warm clothes are made from their wool, their milk, and meat provides food, and even their dung is used for fuel. While yaks are dependable domesticated animal, they are also surprisingly fast runner, especially in sprints. In Mongolia, yaks races are popular form of local entertainment.
The Yaks Festival is one of the most important festivals in Mongolia. It’s held each year on the 23rd of July, in Orkhon Valley, in Bat Ulzii, province of Ovorkhangai.
The program of the entire day focuses on the animal: rodeos, milking trials, beauty contest, polo on yak back, and races! This local celebration attracts a lot of people because it’s entertaining and full of surprises! On the occasion, Mongolian people wear their nicest traditional clothes to attend or take part in the different games and trials.
Contact us for your custom-made private trip for experiencing this authentic tradition! 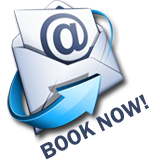