HIGHLIGHTS OF THE TOUR 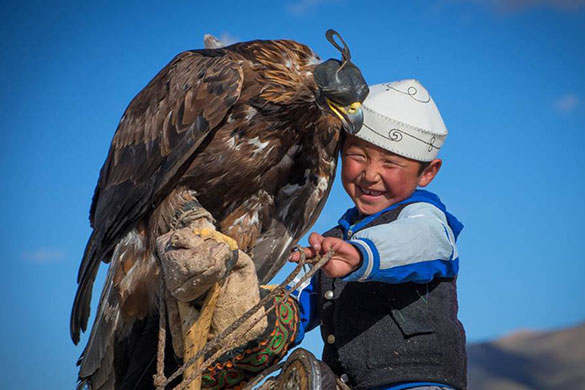 The Eagle festival or Golden Eagle festival is a traditional festival, annually held in the first week of October, in Western Mongolia by local Kazakh minority and the Mongolian Eagle Hunters’ Association for the purpose of promoting their heritage to the next generation. In the eagle festival, Kazakhs show their eagle hunting culture, skills and compete the catching small stuffed animals such as foxes and hares with trained golden eagles. Additionally, this festival includes a lot of activities such as parade, best eagle at hunting and locating, cultural and handicrafts exhibition, Uriankhai archery competition, and goatskin tug of war on horseback.
An another smaller festival, the Altai Kazakh Eagle festival, is held nearby Tolbo village in the 3rd week of September each year. It follows much the same pattern as larger Golden Eagle festival, with about 40 eagle hunters participating. 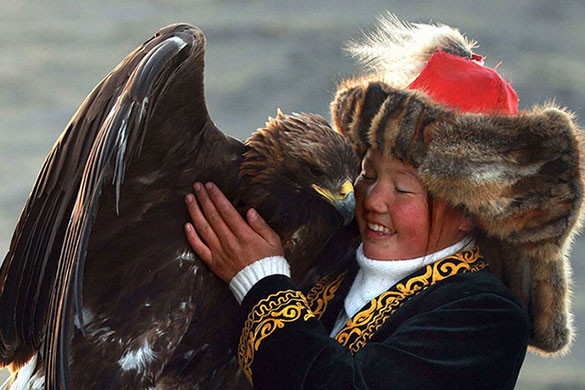 (Aquila chrysaetos) have incredible speed /241 kmph or 190 mph/, great eye sight, gold feathers on the back of its head or neck and powerful feet with sharp talons. The average male weight is 3.6 kg (8 pounds) and for females is 5 kg (11pounds). They live about 30 years. They can live in many different types of climate and feed mainly small animals such as foxes, hares, and mice.
Hunters prefer females because they are larger and stronger than the male and more aggressive as well. Females weigh up to seven kilograms, which is a third heavier than males. Men bring the female eagle at its young age from her nest for training to hunt.
After bringing it, all elders garter then they name their eagle and make some rituals. Training eagles takes a lot of time (3-4 years) and requires constant daily attention. Generally, after 10 years training and hunting, eagles are released to the wild.
The season for hunting with eagles is from October to March. Eagles hunters mainly hunt hares, marmots and foxes but occasionally catch wolves. The eagles are given a piece of meat as a reward after each hunt. Golden eagles are skilled hunters.

Victor P - Dream Mongolia/Doogi organized a great 10 day tour for my girlfriend and I. Doogi was able to organize a tour including 3 days in Southern Mongolia (Gobi), 5 days in Western Mongolia and 2 days in Ulaanbataar. ​​​​​​​​​​​​​​ 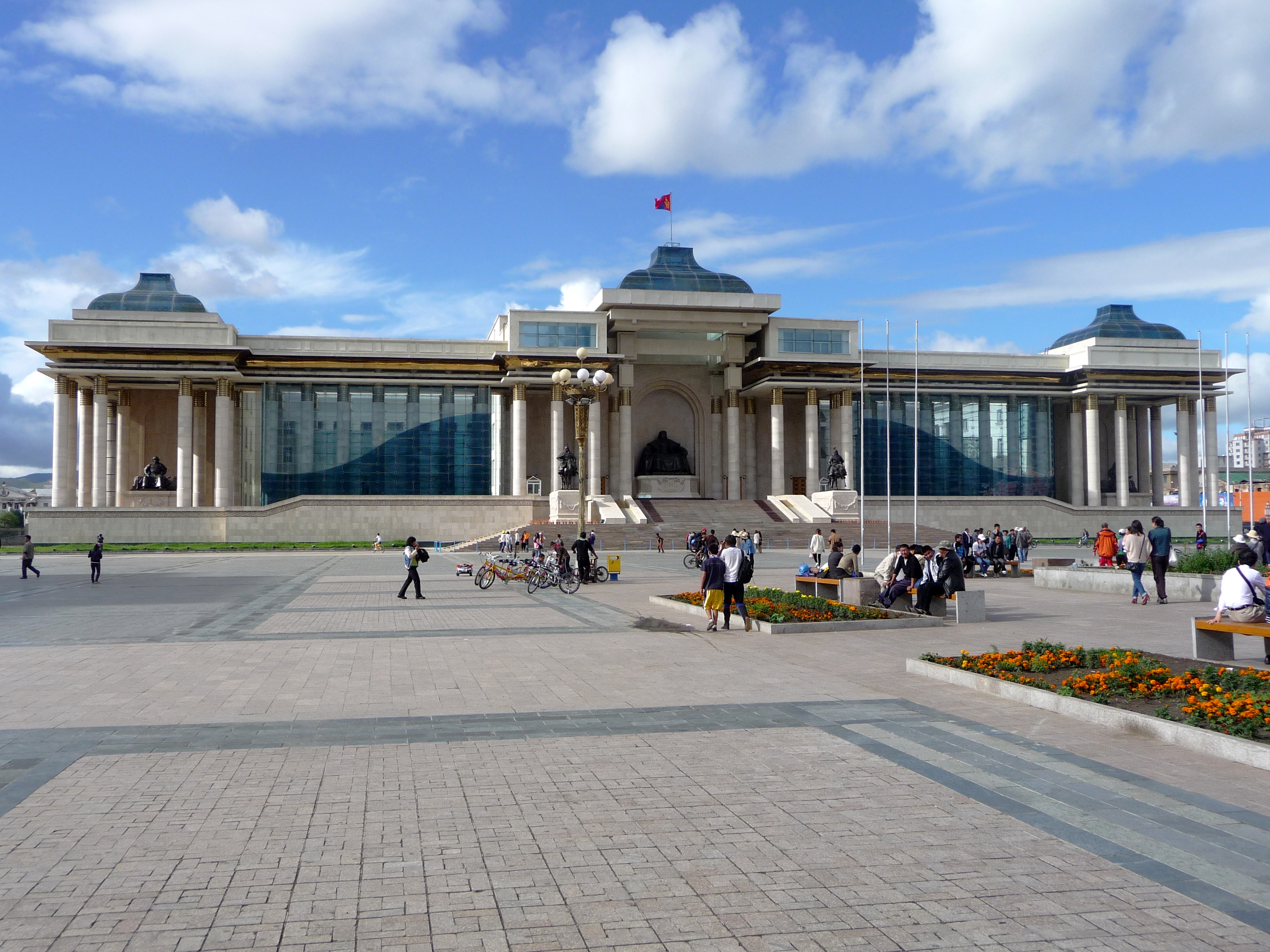 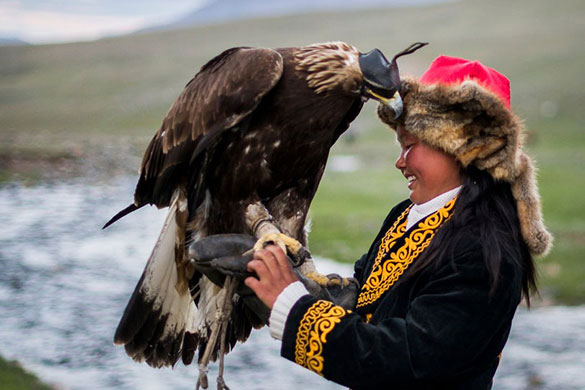 Day2. Fly to Ulgii and explore the Ulgii city (B/L/D)

Fly to Ulgii, capital of Bayan-Ulgii in western Mongolia. Visit the local History Museum, craftwork, and a Kazakh family. Stay in ger camp 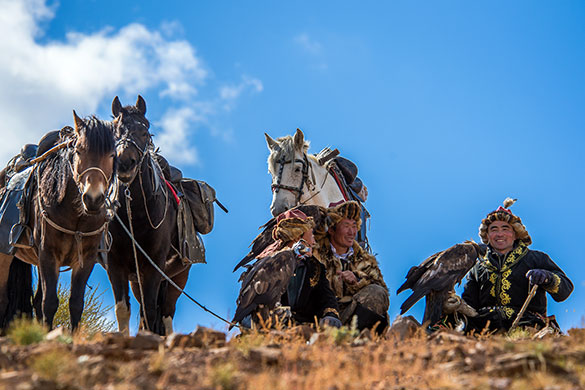 The official opening ceremony commences with the participants parading in on horseback with their eagles. The competition begins with each Kazakh displaying his hunting outfit and accessories, the most elaborate and beautiful of which receive the highest points. In the afternoon, the judges will evaluate the Golden Eagles’ speed and agility. The eagles will be released from a cliff with their owners standing below, signaling for the eagles to land upon their arms as they do while hunting. Those with the fastest times and best technique will be awarded the highest scores. In the evening, attend a Kazakh play in honor of the hunters and their eagles. Stay in ger camp 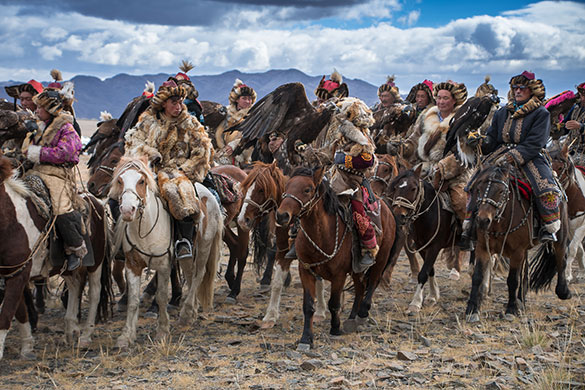 The Golden Eagles will be released from a cliff to attack fox skins that will be dragged by their owner on horseback. The eagles will be judged on their success of grabbing the "fox", their speed, and "gripping" technique. As the points for the competitions are being tallied, the Kazakhs will compete in their traditional game called "kukbar"- passing goat skin which tests one's horse riding skills, strength and agility. In the late afternoon, the winners of the festival will be announced at the awards ceremony. In the evening, enjoy a celebration dinner. Stay in hotel 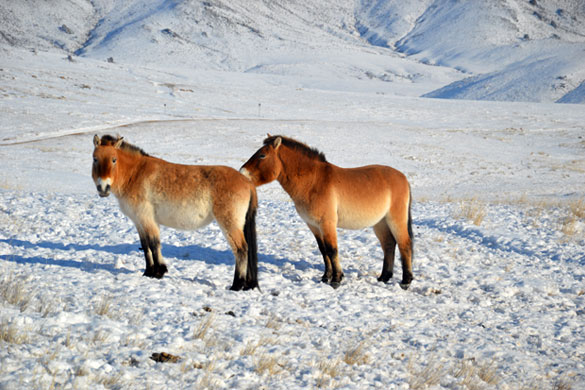 Day5. Fly back to UB and drive to Khustai National park (B/L/D)

We will fly back to UB. After landing in UB, we will drive to Khustai National park. We will see the takhi or Przewalski’s horse, one of the world’s most endangered species and the world’s only try wild horse. In the afternoon, visit the Ongut stone complex, a Turkic memorial and the largest grave complex in Central Asia. Stay in ger camp 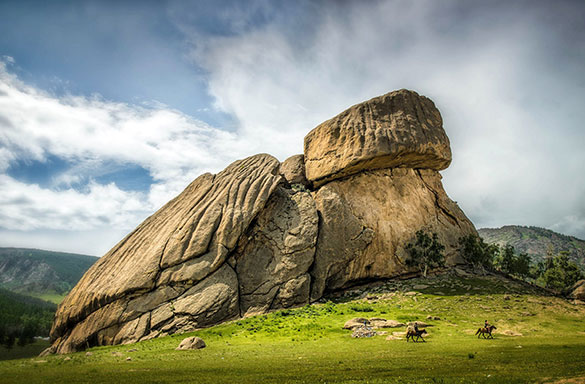 We will drive to Terelj NP. On the way of National park, we will visit to Chingis Khaan Equestrian statue that is highest one in the world. In the NP we will hike to small temple Aryabal. Also we will make horse riding in the NP. Overnight in ger camp

Day7. Drive back to UB and short city tour (B/L)

We will drive back to UB. After arriving in UB, we will visit to Bogd Khaan palace museum and Zaisan Memorable hill.  Transfer you to the hotel

Transfer to the airport for your departure.

THANKS FOR JOINING US

All transportation listened in the itinerary
Twin share accommodation: hotel*** and in ger camps
Three meals per day
Services of English speaking guide
All taxes and entrance fees to the protected areas
Sightseeing cost
All transfers between airport and hotel
Horse and camel riding cost